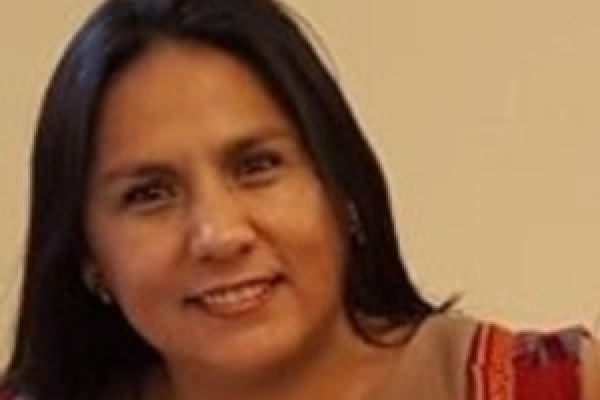 Elvia Andía Grágeda, Quechua instructor in the Department of Spanish and Portuguese at the Ohio State University, recently became the first American Council on the Teaching of Foreign Languages (ACTFL)-certified Oral Proficiency Interview (OPI) tester for Quechua. Andía, a native speaker of Quechua, is in fact the first certified OPI tester for any American indigenous language.

This is significant for many reasons. Among these is the access to opportunities that the OPI grants to young speakers of Quechua—be they heritage learners or, perhaps in the future, world language students. These opportunities include the new Seal of Biliteracy in the state of Ohio, which is granted to high school students who can demonstrate a high level of proficiency in English and an additional language. In Ohio and other states in the U.S., the OPI is one testing option for students to demonstrate oracy in a language. Information available through the Ohio Department of Education explains that the Seal of Biliteracy makes students more competitive, whether they are applying for college, the workforce, or language-related positions in the military.

In addition, Ohio’s Credit Flexibility provision makes it possible for schools to award high school credit to students who can demonstrate proficiency in a world language. “Demonstrating proficiency,” however, is a less than straightforward task for speakers of less commonly taught languages (LCTLs). ODE sources tell the story of a heritage speaker of Marshallese who received high school credit for his language proficiency only after ODE recruited a native speaker from the Marshall islands consulate in Washington D.C. to give a proficiency evaluation. Clearly, ODE is willing to go to great lengths to provide students of all languages access to the credit flexibility provision. What the availability of an OPI does is facilitate this process for speakers of Quechua.

How does one become certified as the first OPI tester for a language?

The first step in receiving Full Certification is a 4-day OPI workshop. Following the workshop, a tester-in-training works with a mentor in order to develop the skills necessary to be an OPI tester.  In 2017, Andía attended a 4-day workshop then requested to be mentored by Dr. Judith Liskin-Gasparro, Associate Professor Emerita of the University of Iowa, with whom she had worked in a previous workshop.

An individual working through the OPI Certification process must be able to demonstrate two skills: the ability to accurately rate the proficiency of test-takers and the ability to elicit interviews that can be rated according to OPI evaluation standards. Eliciting an OPI interview is no simple task; interviewers must ask questions that impose progressively more complex communicative tasks on test-takers—all while maintaining a natural flow of conversation. Testers-in-training demonstrate their ability to rate and elicit interviews by rating and conducting practice interviews, which are reviewed by their mentor.

The particular challenge that arises when an individual seeks OPI Certification in a LCTL is that there are often no mentors who speak that language. In Andía’s case, her mentor did not speak Quechua. Fortunately, according to Dr. Liskin-Gasparro, a process has been in place for decades in order to train OPI testers in new languages.

Typically, an OPI tester-in-training must create a detailed, annotated outline of each practice interview, rate the interview, and justify their rating according to their notes. Since Andía was preparing to be the first OPI tester in Quechua, she also needed to transcribe the practice interviews—conducted in Quechua—in Quechua, Spanish, and English, including every ‘uh,’ pause, and cut-off word. In order produce these materials for Advanced and Superior speakers of Quechua, Andía needed to travel to Bolivia to conduct interviews.

From the transcriptions and other rating materials, Dr. Liskin-Gasparro was able to observe Andía’s thought process in both eliciting the interview and assigning a rating. From these materials, Liskin-Gasparro could give Andía feedback on how to improve.

Once Andía demonstrated that she could consistently and accurately rate the oral proficiency of Quechua speakers and elicit the interviews that would allow this rating to take place, she was granted Full Certification as an OPI tester for Quechua.

What does this mean for Quechua at OSU?

In general, creating a more robust Quechua program is part of the Center for Latin American Studies’ goal that Ohio State become a centralized authority on Andean studies. Dr. Liskin-Gasparro highlighted that the greatest benefit to working through the OPI interviewer certification process is washback in the classroom. As she said, after becoming OPI certified, instructors, “see the classroom differently.” Andía voiced this herself, commenting that she has redesigned the syllabi and activities of her Quechua courses to target the development of students’ communicative competence. In other words, students who want to learn to communicate in Quechua should take class with Andía.

Dr. Terrell A. Morgan, professor of Hispanic Linguistics at Ohio State and director of the Center for Latin American Studies, says, “We are so lucky to have such an innovative instructor as Elvia Andía. Her expertise and dynamism have made us the very best place in the U.S. to study Quechua, and her trailblazing collaboration on the ACTFL OPI assessment instrument continues OSU’s tradition of leadership in the teaching of LCTLs in general.”

Do you want more information?

As Dr. Morgan states, “The icing on the cake is that you don’t even have to come to Columbus to be a part of our Quechua community; with the technologies and protocols Elvia has harnessed, she’ll come to you.”