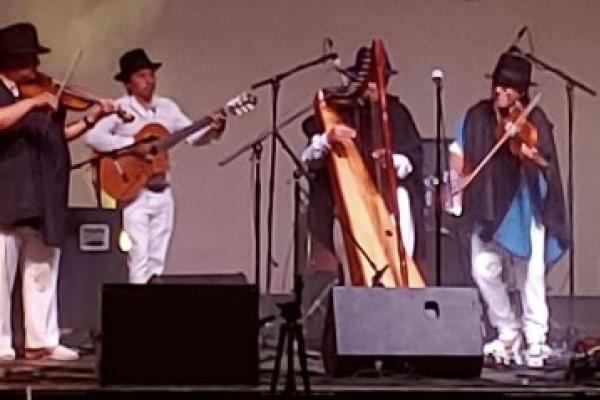 In June, Santiago Gualapuro and Michelle Wibbelsman traveled to Chicago to partake in the Jatun Puncha-Inti Raymi celebrations along with more than 500 Otavalans from all over the United States, Canada, Ecuador and other international destinations. The event this year was particularly meaningful as folks gathered for the first time in two years due to the pandemic. In the performance hall of the Patio Theater, in community centers and on the soccer fields we witnessed how this transnational Otavalan community recreated their sense of home and of ethnic belonging, transposing their language, music, food and cultural traditions onto new spaces and transforming them with community joy, music making and dancing. 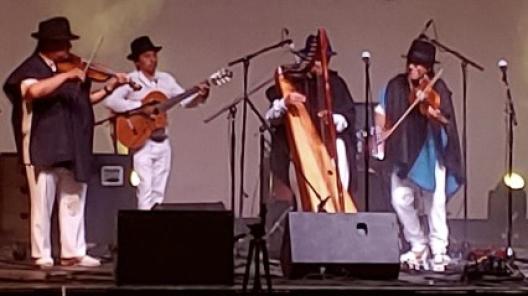 Inti Raymi, Kichwa for Sun Festival, is an Andean Indigenous tradition celebrated on the summer solstice every year commemorating the end of the harvest season. In the area of Otavalo, known as the Awakening Valley, the local term Jatun Puncha, the great day, is also used.

This tradition long ago surpassed the Andean natural borders and is now celebrated all over the world where Otavalo indigenous peoples live. On social media platforms like Facebook, we can see ads of invitations to celebrate Inti Raymi in Valencia, Barcelona, Pamplona, and other cities in Spain, Antwerp in Belgium, Lisbon in Portugal in Europe. In the USA, this event has been celebrated since the early 2000s in different places like New York City, Chicago, Salt Lake City, San Francisco, and Seattle, places where Otavalans live and gather in honor of this tradition.

In the Ecuadorian Andes, Inti Raymi is celebrated when the harvest of the crops is finished. People prepare chicha or aswa-a fermented corn-based drink, mote similar to Mexican hominy, and other delicacies from the Andean area. The celebrations start on the first days of June as melodies on rondín (harmonica) and other instruments fill the air and costumed dancers visit each house in the community where they reside dancing the traditional sanjuanito. Observance of the summer solstice on June 21, the ritual bath at sacred springs and waterfalls on June 22, the víspera or eve of the festival on June 23, and the toma de la plaza “taking of the main city square” June 24-26 and again June 29-July 1 are some of the main events of the Inti Raymi in the communities. Dr. Wibbelsman’s Ritual Encounters: Otavalan Modern and Mythic Community book (U of I Press 2009; Spanish translation AlterNativas Open Access E-Book Series, 2015 http://alternativas.osu.edu/es/ebooks/catalog.html) explores the significance of this festival. 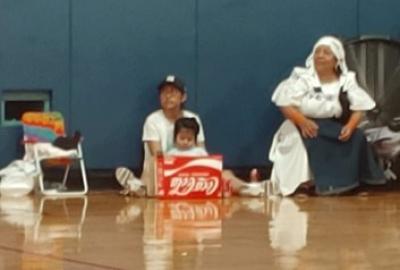 Far from the Andes, the tradition experiences some changes and adaptations to local circumstances but maintains the heart of this community celebration. This year in Chicago, Illinois, Kichwas gathered from nearby states like Ohio, Wisconsin, Minnesota, Kansas and others farther away like California, Florida, New York, and Utah, as well as international destinations. In spite of record- breaking heat in Chicago that weekend, the calendar of events bustled with soccer and basketball tournaments (Santi’s team placed in the finals!), workshops and activities for the kids, the Tullpu Makikuna “Community Art Gathering,“ women’s discussion forums, and two nights of magnificent Andean music concerts. Priosta Magola Lema alongside Nelly Lema and the Organizing Committee secured the participation of renowned musical groups such as Yarina, Ñukanchik Ñan, Chusku Llacta, Inka Gold, and a special appearance by Andean harp master Taita Alejandro Terán among others as well as the Kichwa Community Chicago Dance Troupe ANAWY. 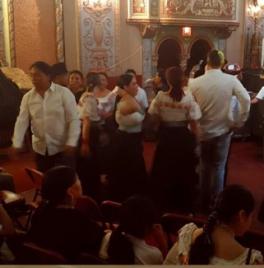 The Otavalo Kichwa Community of Chicago was able to bring the best of the Inti Raymi spirit to the community and make this Inti Raymi a time for meeting old friends and making new ones. Participants sang along to traditional Kichwa songs out loud in their mother tongue Kichwa and danced the traditional ‘in circle’ dance with their families and friends. Children ran around the venue joyful and carefree, some speaking only in English as second and third generation Otavalans in the United States. Teenagers donned their finest traditional attire. Tíos (young men) tested their community whistles to get the attention of compañeros across the theater and delighted in recreating the soundscapes of their respective communities back home. Enjoy recordings and more information on the event’s Facebook page https://www.facebook.com/intiraymichicago2022/

As a Kichwa Otavalo, Santiago expressed that participating in this very Andean ceremony creates a unique sense of belonging and empowerment for the Indigenous community away from home. The vibrancy of Andean culture is evident and as the organizers stated repeatedly in their presentations, “we have to save our cultural representations and traditions for the future Kichwa generations who have already been born in the United States.” He expects this cultural manifestation to continue growing beyond its natural borders and be preserved for generations to come. Santi believes there is an opportunity for university students and professors alike to work together with this and other immigrant communities in the United States in helping to preserve the cultural legacy of Kichwa and other Indigenous culture representations.

Santi looks forward to attending Inti Raymi Chicago 2023, which promises to be the best Inti Raymi yet! And Michelle, who has been dancing with the communities of Peguche, Otavalo and Turuku, Cotacachi since 1995, is eager to return to Ecuador next summer for the festivities there. We both came back invigorated by the encounter with friends, compañeros, compañeras and compadres at Inti Raymi Chicago 2022.