Reflections on Embodying Unlearning with Daniel Bryan from the Pachaysana Institute

Reflections on Embodying Unlearning with Daniel Bryan from the Pachaysana Institute 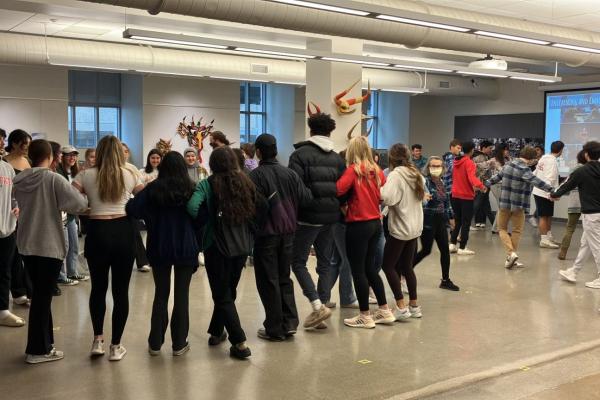 This week, Kawsay waqaychaqkuna was thrilled to welcome Daniel Bryan from the Pachaysana Institute to OSU’s campus! Thanks to the Center for Latin American Studies, Daniel was able to spend three days on campus, recruiting students to the Pachaysana study abroad program in Ecuador and facilitating two interactive workshops on unlearning, one on puppet-making and one on embodied movement along the lines of Augusto Boal’s Theatre of the Oppressed.

Kawsay waqaychaqkuna who were able to participate in the embodied unlearning workshop reflected on the experience, sharing how important it was for them to engage in activities that give their bodies practice in doing otherwise. The activities Daniel facilitated invited participants into different kinds of interactions from what might be habitual and taken for granted, providing insight into the ways in which coloniality lives even in their gestures and the ways in which they greet each other (or ignore each other!).

One of the most impactful activities was a sort of Simon Says game, which functioned not only as an effective ice breaker, bringing laughter and play into the learning experience, but also helped demonstrate how language is an arbitrary system. Daniel would utter commands, but had given them instructions to then do an action that did not match his words: they were to stop when he said “walk,” walk when he said “stop,” clap when he said “jump,” and jump when he said “clap.” The many hesitations, errors, and muttered swear words testified to how difficult it was to break one symbolic system and embrace another. Yet many of them reflected that what was the most profound element was when Daniel asked them to reflect upon the consequences of messing up. He reminded them that he had not imposed any consequences or value judgments on “getting it wrong,” exposing the ways in which we have embodied and self-imposed fears of failure.

Coming out of the workshop, their question for themselves, other workshop participants, and Kawsay Ukhunchay is how do they take these lessons into our daily life? How can they amplify and extend the experience so that new patterns of embodiment take hold?