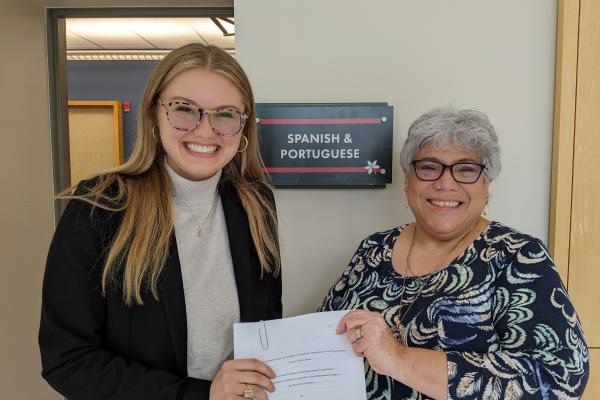 SPPO wants to congratulate Kathleen Fink who defended her interdisciplinary Honors Thesis “Immigration in Modern Spain: An Analysis of Economics, Gender and Cultural Representations in Spanish Cinema” under the direction of Dr. Eugenia Romero and the support of Dr. Alexander Thompson in the Department of Political Science, and Dr. Ethan Doetsch in the Department of Economics. Kathleen’s thesis does a qualitative data regression analysis on Spain’s immigration from the 2000 to show how the intersection of individuals’ identities—including gender, race, ethnicity, native language, education, and cultural background—contribute to immigrants’ experiences of integrating into the Spanish economy and society and how those experiences are depicted in . contemporary Spanish cinema. Particularly, Kathleen works with six different films which provide various means to analyze the experiences of women who immigrate and integrate into the Spanish economy and society. Congratulations Kathleen!