Ally Goldman has held a special place in her heart for Spanish since the 6th grade. As Ally progressed in her education, her love for Spanish continued to grow; it quickly became the subject that she looked forward to every day. As an OSU undergraduate Spanish Major, Ally spent a semester studying abroad in Toledo, Spain, and after her 2019 graduation, she returned to Spain to work as a language assistant at a primary school in Madrid. 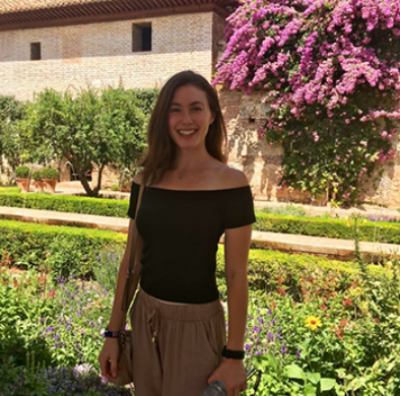 Ally was awarded the Loann Crane Undergraduate Award for Hispanic Studies in spring 2018. She used the funding award toward a 2018 summer study program in Toledo to gather research for her undergraduate thesis. Her undergraduate thesis focused on the acquisition of the voiceless dental fricative among Americans learning Spanish as a second language in Spain. Ally wanted to investigate how English speakers adopt that Castilian language trait over time. “It was just a super interesting sound, and it was so salient within the group of students that I was studying abroad with, that I wanted to explore it more. I wanted to investigate if language attitude and how it’s represented orthographically had any influence as well.”

As a language assistant at a bilingual elementary school in Madrid, Ally has continued to study language education. “It’s so interesting to see the differences between how language is taught within the Spanish system and compare it to the system in the United States. There, children start learning a second language in preschool. The primary school where I work is a public bilingual school, so even though not all of the students are necessarily fluent in their second language, several key subjects are taught in English rather than Spanish: natural science, social science, and, of course, English. They have so much exposure from such a young age! They might not become fluent in English as they get older, but it builds a great foundation for them.”

In the future, Ally hopes to return to the U.S. and begin working toward a Ph.D. in Hispanic Linguistics. Beyond earning a Ph.D., Ally’s main career goal is to use her education and career to positively impact the lives of others. Her advice for undergraduate students studying Spanish or Portuguese? Study abroad, even if it seems scary. She also encouraged students to be open-minded to every opportunity offered within the department, such as the SPPO conversation tables, the Spanish and Portuguese Club, or volunteering for Spanish-speaking families at parent-teacher conferences in the community – “All of those activities are a great way to practice your Spanish... And you never know what opportunities will come out of those experiences!”