For Elvia Andía Grágeda, the coordinator of SPPO’s Quechua Language Program, educating people about the Quechua language and culture is not only important, but deeply personal. She grew up in an indigenous community of Quechua-speakers in Bolivia and feels a very strong sense of pride in her heritage.  In this first article of a 2-part newsletter series, we present insight into Andía Grágeda’s Quechua heritage, and how her passion for teaching Quechua to non-native speakers began.

Andía Grágeda comes from a family filled with pride in their Quechua heritage. Her brothers are engineers who chose that field of study with the goal of returning to their father’s land to work within the indigenous community. She chose to work in the field of education with an analogous goal –in her case, to educate others on the Quechua language. 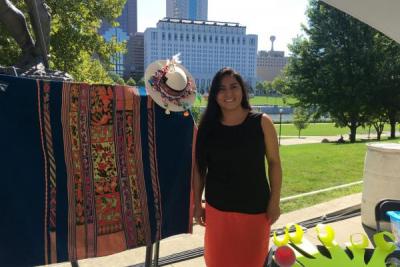 During our discussion, Andía Grágeda took care to explain that, even within Bolivian cities, there is discrimination against indigenous communities. It is closely felt and engrained in the indigenous population, when considering their culture and language. “At the university people would deny knowing how to speak Quechua. They would say, ‘Oh my grandparents speak it, but I do not.’ – But of course they spoke Quechua! You could tell by the way they structured their sentences in Spanish, that their first language was Quechua.” Elvia, on the other hand, was very proud to speak her native language. The language is hers and provides a valuable venue to stay close to her community.  She is acutely aware that her community is very proud that she is in the United States sharing their language and culture with a wider, interested population.

Andía Grágeda was teaching Quechua language and culture at a university in Bolivia when she applied to teach Quechua at Ohio State. A friend had mentioned the job posting at Ohio State, so she decided to submit her materials. It was a big personal and professional step for her, her family, and her culture. While the professional transition from Bolivia has been smooth and successful, she has found the hardest part to be personal -- living so far away from family, with just one visit to Bolivia per year.

In her short time in the United States, Andía Grágeda has made a great impact on our department, university and beyond, with her dedication to bring awareness and recognition to the Quechua people, her language and culture. Read the next edition of the SPPO Newsletter to learn about Andía Grágeda’s debut novel, Pirqakunawan parlaspa - Hablando con las paredes, which received the 2019 Premio Guamán Poma de Ayala en Lengua Originaria, a prestigious national literary prize in Bolivia.