What did you eat and drink today? Have you ever considered the preferences and traditions that influence these daily decisions? SPPO graduate student Anthony Palmiscno is exploring Food & Drink Studies for his dissertation research, a field that has been gaining increasing interest in recent years. “People usually don’t think about the significance behind food and drink, yet it has such a huge impact on our lives. And it’s something that we do every single day, multiple times a day.” For many years, Food & Drinks Studies has been overlooked, but in the past ten years the field as seen significant growth. “I think people are starting to realize its importance and impact. That’s the reason that I saw promise with this research.” 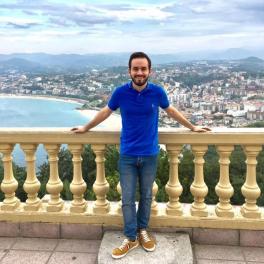 Anthony’s interest in the field began when he applied for a Fulbright Grant in Spain. He applied for the grant with the expectation that he would be living in Madrid, as that was where previous Fulbright grant recipients had been assigned. He was thrown for a loop when he received a notification that he had been awarded the grant and he was being assigned to La Rioja, an autonomous community nestled between Basque Country and Navarra in Northern Spain. “That was the first year that they expanded the program to include La Rioja. I was surprised at first, but it ended up being a really great experience! It led me to making great friends and acquaintances, I was able to explore more of Northern Spain, and I found a research topic that was incredibly fruitful for my Ph.D. work.”

It was in La Rioja that Anthony began to focus on the mythology of wine and the different representations of wine in both literary and cultural studies. “It’s interesting, often times wine is thought of in a carnivalesque, drunkenness type of way. However, it can also be examined as a way of organizing and expressing collectivity, which is what you see in the north of Spain.” La Rioja is the principal wine region of Spain and it’s the primary export of wines on an international level. Rioja wine is also the most commonly consumed wine throughout Spain and it’s the only wine in the country that has a “denominación de origen calificada” (designation of origin) – the highest ranking a wine can receive in Spain. “When I lived in La Rioja, I saw the importance of wine. Not just on a national or international level, but its importance within the family. There are so many rituals that center around wine, yet very little has been written about it in Iberian Studies or Popular Culture Studies. I think it merits discussion because it says so much about regional identity, intergenerational traditions, how wine is marketed, sold, and identified, and the politics around the naming of wine.”

Anthony’s research will span a wide breadth. In one of his dissertation chapters, he will examine how the region of La Rioja uses wine as a brand. “I want to examine how a region can use a product as a brand and how that brand is consumed within the different regions of the country, as well as on an international level.” Another chapter will explore how alcohol is depicted in Federico García Lorca’s poetry. “Lorca uses a lot of water symbolism in his poetry, so I’m digging into the dichotomy between the imagery of wine and water in his work – wine as a carnivalesque craziness that’s in opposition to water.” Anthony will also take a transatlantic approach and explore how wine perpetuated colonial ideals in 19th century Argentina. “Sarmiento, the President of Argentina at the time, was on a nationalizing, Europeanizing mission to white-wash Argentina. He used wine as one way to achieve this goal, bringing over French varietals to ‘whiten’ the culture of the country.”

In addition to Anthony’s research in Food & Drink Studies, he is deeply interested in his teaching and the utilization of performance-based pedagogy in the classroom. Prior to joining the OSU Department of Spanish and Portuguese’s Ph.D. program, he’s had experience teaching K-12 Spanish. He says that his time working with younger students has provided him with a gamut of practical experience that has helped him as a language instructor at OSU. “My advisor, Dr. Paloma Martinez-Cruz has helped me build my tool kit, and during my time as a graduate student I’ve incorporated performance-based pedagogy into my classes. It uses a lot of movement, which is a proven methodology in Second Language Studies to help students retain information. I try to use performance exercises that get students moving.” He’s incorporated activities such as, “Cross the Line” where students line up across from each other and run to the opposite side when Anthony poses a statement such as, “Cross the line if you are an only child.” As classmates become more comfortable with each other, the questions might get a little deeper such as, “Cross the line if you have ever been in love.” It is an activity that creates a space for vulnerability while utilizing their Spanish language comprehension skills. “I try to bring community into my classroom. You have to feel safe in order to learn. Class should be a place of growth – after all, no one is perfect.”

In addition to Anthony’s performance-based pedagogy, he tries to incorporate technology into the classroom as much as possible. He frequently utilizes tools like Padlet and Flipgrid for students’ assignments, or creative activities where students submit photos as part of their assignment. “In my Spanish Film course, I assigned the activity “Estoy encontrando placer en…” (“I’m finding joy in...”), where they had to take a photo from something in their own environment that brought them joy. Then they had to analyze the photo and explain why they chose a certain angle, why they chose a certain type of lighting, and style decisions. They’re able to address course objectives while also bringing aspects of their life into the classroom.” The utilization of technology became especially important for Anthony during the COVID-19 pandemic. “As an instructor, it was challenging to build a sense of community in the classroom while everyone had to stay in their seats, six feet apart or participate via Zoom. But I was able to use a lot of different tools that still allowed students to participate as much as possible during class.” Anthony says that the pandemic ultimately reminded him of the importance of being a flexible educator. “When situations change, so do course objectives, course structure, and activities. And that’s okay.” He hopes that moving forward, there will continue to be flexibility in the classroom to accommodate for students’ needs.

Anthony has a book forthcoming that he has co-edited in collaboration with a professor from the University of La Rioja that examines the representations of alcohol in literature and film. The book, Kindred Spirits, is written in English and it is expected to be released by the end of 2021 or early 2022. The SPPO website will post a news update when the book has officially been released.