Dr. Stephanie Aubry, Associated Faculty member in the Department of Spanish and Portuguese, and Dr. Katherine Borland, Associate Professor in the Department of Comparative Studies and Director of the Center for Folklore Studies, have received a Global Arts + Humanities grant to fund a class that they will be introducing in the Spring 2022 semester. The class will serve as a “field school” that involves OSU undergraduate students learning about the lives of undocumented migrants and visiting various locations throughout Ohio, such as immigration detention centers and sites of ICE raids. The class will also have the opportunity to meet with activists and individuals who have lived in sanctuary. 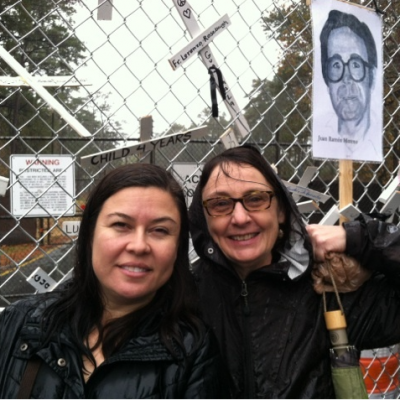 The field school course was inspired by Dr. Aubry and Dr. Borland’s experiences with solidarity activism, a movement that dates back to the 1980s. Dr. Borland explains that, “During the 80s Central America was engulfed in many different civil wars and US policy was very interventionist and unhelpful. There were people in the U.S. who felt that we needed different foreign policies, so cities and states began to create their own foreign policy tours of Central American countries to show the public in the States what was really going on.” These trips are known as “delegations” and both Dr. Aubry and Dr. Borland have participated in this element of solidarity activism – Dr. Aubry has visited El Salvador and Dr. Borland has visited Nicaragua and Honduras. In the 1990s and early 2000s there was a return to solidarity activism that focused heavily on sanctuary. The movement involved churches opening their doors to people fleeing the violence of their home countries and offering them sanctuary from border control. There was even an underground network that helped people get all the way up to Canada. “In the 80s and 90s the migration from Central America to the United States was mostly due to state-sponsored violence. There were civil wars and militarized regimes. Today, there is a great deal of gang violence. The causes have shifted but we still have a similar situation where families are arriving at the border who need safety and refuge,” notes Dr. Aubry.

In addition to her experience participating in delegations, Dr. Aubry also has experience volunteering with the Refuge and Immigrant Center for Education and Legal Services (Raíces), based in Texas. As a volunteer with Raíces, Dr. Aubry visited Karnes, an immigration detention center for women and children in Texas close to the U.S. - Mexico border, where she helped women prepare for their Credible Fear Interview (CFI). “Women who were arrested at the border with their children were detained at Karnes. They were kept there anywhere from a couple of weeks to several months. As a volunteer, I helped prepare the women for their CFI with immigration officials. If they passed, they were able to stay in the States until their hearing with an immigration judge.” During her time at Karnes, Dr. Aubry explained to the women how to respond if they didn’t understand what they were being asked in the interview, and most importantly, why it was so important that they speak up and explain the danger they were facing in their home country. “These women were scared and had never been in this type of situation before. They might come from situations where women weren’t able to speak up for themselves, so they might not want to say much during their interview with immigration officials. We explained to them that, in this legal situation, it was crucial that they explain fully and clearly why their life was in danger and why they were forced to leave in search of refuge in the United States.” If the mothers did not pass the CFI, there was an opportunity for a follow-up interview, but things would become much more difficult and complicated. The goal was to pass the first interview. Unfortunately, Karnes has since been shut down. “It was shut down during the last administration. The women and children being held there were relocated on a bus in the middle of the night. The lawyers who were working with the women did their best to follow the buses, but they were not sure exactly where the women and children were relocated.” This work at Karnes also informed the way that Dr. Aubry and Dr. Borland wanted to shape their field school. As Dr. Borland points out, “We often think of these issues only happening at the Southern border. But there are immigration detention centers and ICE raids in Ohio too.”

The field school will encourage students to consider two themes. The first is considering the situations that people find themselves in the United States, specifically Ohio, without the proper documentation and how it impacts their daily lives and every decision they must make. And the second theme is focused on learning about the network of activists who have been working for decades to support people in such situations. Dr. Aubry expands on this idea, saying that their goal for the field school is to, “encourage students to think about the landscape of immigration and solidarity activism here in Ohio. We want to reflect upon our ability to move about freely and safely in society and how some of the normal, daily things that we do could pose a threat to someone without documents.”  Over the course of the semester, students will visit with two mothers who lived in sanctuary in two different churches in Columbus. Both women are now out of sanctuary but face new obstacles, such as earning a living, now that they’re home with their families. Students will also visit two different detention centers in Ohio, as well as individuals who worked as immigration activists in El Salvador during the civil war in the 1980s and early 90s. They’ll visit a religious organization in Cleveland that worked in solidarity with Salvadorian citizens during the civil war. Finally, students will visit the Fresh Mart Meat Packing Plant in Salem Ohio, which was a site of massive immigration raid in 2018. Over 100 ICE agents with helicopters and vehicles raided the site and 146 migrants were detained as a result.

“Students will be charged with developing questions so that they can participate as part of an investigative team to build an understanding of what’s really going on Ohio as we visit these sites. At the end of the semester, students will be responsible for sharing what they’ve learned through an article that can be published in a university publication, such as ¿Qué Pasa, OSU? or The Lantern, or discussing their experience on ‘Ohio Habla’, a podcast created by our colleague, Elena Foulis.” Dr. Borland explains. Both Dr. Aubry and Dr. Borland hope that, in addition to exposing their students to the realities of the border situation in Ohio, they can also use the course to connect solidarity activists throughout Ohio to each other. “There are a lot of different people doing a lot of different types of outreach in Ohio. An objective for us is to better connect activists working in different areas throughout Ohio through the course. We are learners, we can’t necessarily do the work that the solidarity activists are doing, but we can use their time and this course to serve them through new connections as well,” says Dr. Borland.

The course, though it involves travel, will be fully funded as a result of the Global Arts + Humanities Grant. “There’s no cost to the student, we will have the expenses covered. We will also structure the course schedule around the Spring 2022 academic schedule, so field trips will not interrupt finals week or take place over spring break. We want to build a schedule that work best for the students,” Dr. Aubry and Dr. Borland encourage students to reach out to them via email about any questions related to the course. Course Details are as follows: CS 4193 (1 credit) with Borland. Introductory meeting, January 12 5:30-7:30 PM; Trip One: January 22-23 (Cincinnati); Trip Two: March 4-6 (Cleveland). Additional information can be found on the SPPO News post about the course here.

For those interested in taking action or volunteering time to serve individuals facing challenges related to immigration and documentation, please explore the resources linked below.