Andean & Amazonian Studies and Quechua Language & Culture leadership at OSU planned several events in 2019 to celebrate the “International Year of Indigenous Languages”. The Department of Spanish & Portuguese is proud to have worked with the Center for Latin American Studies to host these highly successful events on campus. 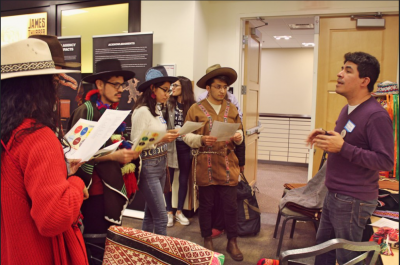 The Quechua Alliance was formed in 2015 to build a strong network of Quechua language and culture enthusiasts and supporters in the United States. OSU had the honor of hosting The 2019 Quechua Alliance’s Annual Meeting, which serves as a gathering place for passionate leaders, scholars and supporters of the Quechua language and Andean culture to exchange ideas and experiences.

The one-day meeting commenced with a keynote presentation from Diego Tituaña, a Kichwa Otavaleño from Ecuador who is a Maurice R Greenberg World Fellow at Yale, and a Diplomat of the Ecuadorian Foreign Service. The keynote speech highlighted the current world-relevance of the “International Year of Indigenous Languages”. Afterward, attendees presented projects and work that highlighted their ideas for learning the Quechua language. Several OSU Quechua students and instructors prepared a traditional Andean Aatapi lunch for the attendees. One of the event organizers, Paola Enriquez Duque, recalls that this was her favorite part of the event, because people were dancing after finishing their meal. That afternoon, Dr. Devin Gammon presented about opportunities and challenges for learning Quechua through study abroad programs. The day drew to a close with recognition of former OSU Quechua instructor, Luis Morató Peña, with the Quechua Lifetime Achievement Award. 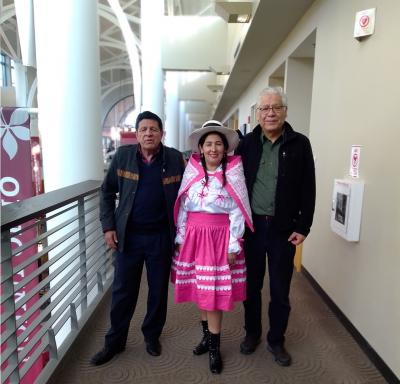 In November 2019 the Department hosted author and scholar Dr. Miguel Arribasplata. Dr. Arribasplata is a recognized Andean Peruvian writer and professor at the Universidad de la Cantuta, Peru. His most recent research focuses on the depiction of armed struggle in Peruvian literature from the underdog’s perspective during the Peruvian Civil War (1980-1992). This particular perspective is important because the Peruvian media often only promotes the elite’s point of view. 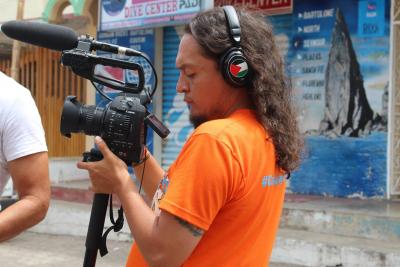 While on campus, he gave a presentation at the department’s Literatures and Cultures Colloquium, “Activismo politico y hip hop en los Andes,” followed by a showing of his documentary, “Ukamau y ké” which he created after the death of his close friend and Bolivian rapper, Abraham Bojórquez. During his visit, Andrés took time to sit down with Ohio Habla to discuss Andean Hip Hop as a form of activism. His visit concluded with a rap and audio-visual concert;  Andrés alternated between performing songs and sharing audiovisual material from Ecuador.

Abya Yala President, Caroline Shipley, explained why Andrés Ramírez served as a valuable visitor for the OSU community given his wide range of expertise: “He is not only a documentary filmmaker, he is also a rapper, visual artist, photographer, and political and cultural activist. We thought his versatility could be a breath of fresh air in an academic environment.”

All events took a great deal of planning and coordination. Many thanks to all of the event coordinators, collaboration departments, and OSU organizations for hosting so many wonderful guests at OSU to celebrate the “International Year of Indigenous Languages”.