Dimensions of Violence in Luso-Hispanic contexts

This year, the graduate student symposium will explore the distinct literary and cultural manifestations of violence in Luso-Hispanic contexts such as Latina/o, Latin American, and Iberian studies across a wide range of historical periods and academic disciplines. Possible themes include but are not limited to: torture, state violence, terrorism, violence in relation to gender, racial macro and micro-aggressions, economic, social and cultural oppression, trauma and memory, etc. We strive to deepen our understanding of historical changes and contexts that shape particular violent episodes as well as common threads that may unite them across geographic and temporal divisions.

Dr. Brian Gollnick (University of Iowa) has a BA in Comparative Literature from the University of Washington in Seattle and a PhD in Literature from the University of California in San Diego. He has published one book: "Redefining the Lacandón: Subaltern Representations in the Rain Forest of Chiapas" (University of Arizona Press, 2008), a study of how indigenous populations in the jungle of southern Mexico have been depicted in a variety of media since the time of the conquest. There are also several articles on his CV related to Mexican culture, Latin American literature, and approaches to Latin American cultural studies. Most of his work and long-term experience abroad has been in Mexico, a part of the world he deeply loves, but his current research relates to political culture in the United States and its engagement with Latin America around the issue of torture. He has been at the University of Iowa since 1999.

Dr. Ulises Juan Zevallos-Aguilar (The Ohio State) as a BA in Literature in Spanish from the Universidad Nacional Mayor de San Marcos in Lima and a PhD in Latin American Literatures from the University of Pittsburgh. He has several articles and books published. His current research interests relate with modern alternatives in the Central Andes and Andean Transnationalism.

For any questions or concerns, please contact the symposium organizers: 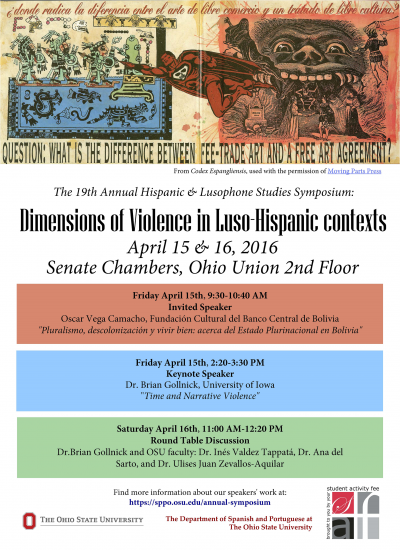 This year, OSUCHiLL will be held in concert with the conference on Current Approaches to Spanish and Portuguese Second Language Phonology (CASPSLaP). Attendees will have the opportunity to attend panels of both conferences.

The organizers of OSUCHiLL are excited to welcome two of OSU’s most distinguished alumni, Dr. Timothy Face and Dr. Patricia Amaral, as keynote speakers.

Dr. Timothy Face (University of Minnesota) is an expert on phonetics and phonology in both L1 and L2 Spanish. He has published extensively on the prosody of Castilian Spanish and on the acquisition and development of the Spanish sound system by L1 English speakers.

Dr. Patricia Amaral (Indiana University) is a leading scholar in syntax, semantics, and pragmatics. Her specializations include historical approaches to syntactic and semantic change in both Spanish and Portuguese, as well as experimental pragmatic methods.

We also look forward to a workshop on statistical analysis in R to be given by Dr. Sonia Barnes (Marquette University).

Conference Dates:
The 2016 Ohio State University Congress on Hispanic and Lusophone Linguistics (OSUCHiLL) will be held from 15-Apr-2016 to 16-Apr-2016, in concert with the conference on Current Approaches to Spanish and Portuguese Second Language Phonology (CASPSLaP).

We welcome papers dealing with any theoretical aspect of Hispanic or Lusophone Linguistics, including but not limited to: sociolinguistics, pragmatics, phonetics, phonology, morphology, psycholinguistics, semantics, and syntax. Talks will be allotted 20 minutes for presentation and 10 minutes for discussion and may be given in English, Spanish, or Portuguese. We also welcome papers that discuss creoles or indigenous languages of Hispanic and Lusophone countries.

Submission guidelines: Abstracts should not exceed 500 words and must be submitted via EasyAbstracts (EasyAbs)

Notification of acceptance: No later than February 15, 2016.

For any questions or concerns, please contact the symposium organizers:

[pdf] - Some links on this page are to PDF files. If you need them in a more accessible file format, please contact spanport@osu.edu. PDF files require the use of Adobe Acrobat Reader software to open them. If you do not have Reader, you may use the following link to Adobe to download it for free at: Adobe Acrobat Reader.