The sociolinguistics lab is a space dedicated to the use of graduate students and faculty engaged in sociolinguistic research.  The lab contains four computer workstations and a variety of audio and video recording equipment, as well as software and other equipment, such as transcription pedals and a response box. Graduate students and faculty may use the equipment on-site or check it out from the Lab Manager to take to the field.  The lab space may also be utilized for meetings and interviews. 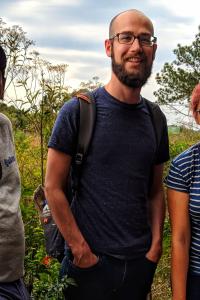 Justin Pinta is a fourth-year PhD student in Hispanic Linguistics. His research broadly concerns language contact between Spanish and several minority languages spoken in Argentina, with his primary interest being Correntinean Guaraní. Justin carried out fieldwork on this understudied variety of Guaraní in the Argentine province of Corrientes during the summers of 2017 and 2018. His work concerned language maintenance and shift in the province as well as the relationship between the high degree of Spanish influence in all areas of the grammar and the language ideologies of the region. His work contrasts Correntinean Guaraní with its closest relative Paraguayan Guaraní, which has been comparatively less impacted by Spanish contact and whose speakers possess a largely different set of language ideologies. 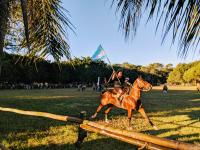